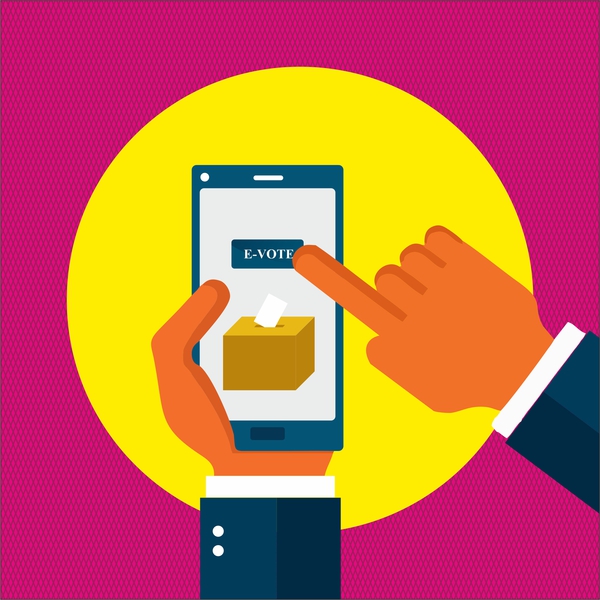 The online voting or e-voting signifies a voting method aided by the internet technology. The central idea behind using a voting method supported by internet and communication technologies is firstly to expand representative democracy and secondly, upgrading voting methods according to technological advancements and innovations. In any kind of democratic system, the voting method aims to enhance political participation of its citizens, speed up the counting of votes casted, is accessible to all the sections of population (disabled friendly, etc) thereby, aiming towards a transparent and accountable governance. The notion of liquid democracy is closely linked with the system of online voting as it seeks to combine representative democracy and direct democracy. The democracy may vary from direct, representative to liquid, however, online method of voting ensures that the divide between the leaders and citizens is eliminated.

According to Scott Fletcher, the predecessors of online voting can be identified in the use of voting machines dating back to the 19th century USA and England. The use of TV sets via telesets paved the way for what was then named as tele-democracy in the 1980s which then gradually transitioned to internet voting with the advent of world wide web in the 1990s. This rapid development of e technology and model of direct democracy in USA and Switzerland resulted into voting machines and postal voting coming out as designs for developing online voting. However, online voting was used in the national elections of Estonia in 2005.

The small baltic state- Estonia began with internet voting in the local elections of 2005 where only 1.9% voted online. In the recent times, this percentage has increased to more than 30% in the parliamentary elections. The voters in Estonian context are named as ‘i-voters’ and eligibility criteria is not restricted to particular gender, income, education, and computer skills. In order to vote, the voters have to connect their ID-card during the early voting period using a smart card reader or using their mobile ID. The online voting method in Estonia has ensured that young voters are involved in the electoral process, and also, that Estonians residents in other countries can vote via internet. In this report by BBC, Arne Koitmae, the deputy head of Estonia electoral office said, “In 2015, Estonians living in 116 different countries participated in the elections using internet voting.” Further, it has been revealed in various news reports that the extension of online voting in the public sphere is not merely about increasing the percentage of voters but also suggesting a change in their preferred method of voting. The percentage of voters casting votes in the online elections has been explained in the following chart from 2007 parliamentary elections in Estonia to 2015. As we can see in the chart above, the voting percentage in the recent parliamentary elections has escalated from 6% in 2007 to 31% in 2015.

Besides, the increase in voting percentage the online security concerns are met by end to end encryption and keeping the voting method updated with new technological developments. The cryptography in the online voting method ensures same voter identity for the certificates in the document. Another aspect is that after the voting, the QR code can be verified with a mobile phone to authenticate the accuracy of vote through different communication channel.

Present system of Online Voting and the way ahead

In the recent decades, the internet voting became prevalent in political election of USA in 2000. The internet voting has also become a trend in other countries such as Canada, Estonia, France and Switzerland. It is true that internet voting is considered an important aspect in restoring individuals’ trust towards institutions and democratic structure, however, internet voting as a method is a complex one. For voters, it is pivotal to have some amount of technical expertise to understand the voting method. In such a context, it is crucial that voters are trained technically and various awareness programs are held so that they can make an informed choice. A mechanism that can also ensure the trustworthiness of the system is making the information publicly available. A pertinent aspect of voting system’s integrity lies in its certification, testing and audit methods.

The other issue considering the future of online voting concerns with the internet security. The risk of system being hacked, targeted by terrorists or rogue nations, plagued by computer viruses or hijacked by political groups. An example in this regard would be Russia’s attempts to hack into election systems of 21 states in USA. As reported here, “The hacking attempt was on the state’s voter registration system, not voting machines. Had hackers taken over the voter registration system, they could have suspended people’s registrations, creating confusion and long lines at the polls”. The attempt looked severe in the sense that hackers could have accessed voters address and other personal details like birth dates.

In the way ahead, it is significant to address that no voting method comes with a flawless detailing. The technology is itself prone to external threats and internal malfunctioning that can disrupt the electoral processes putting the larger democratic structure at risk. In such a context, it will only be appropriate to have a system with minimal risks and end-to-end secured mechanism.