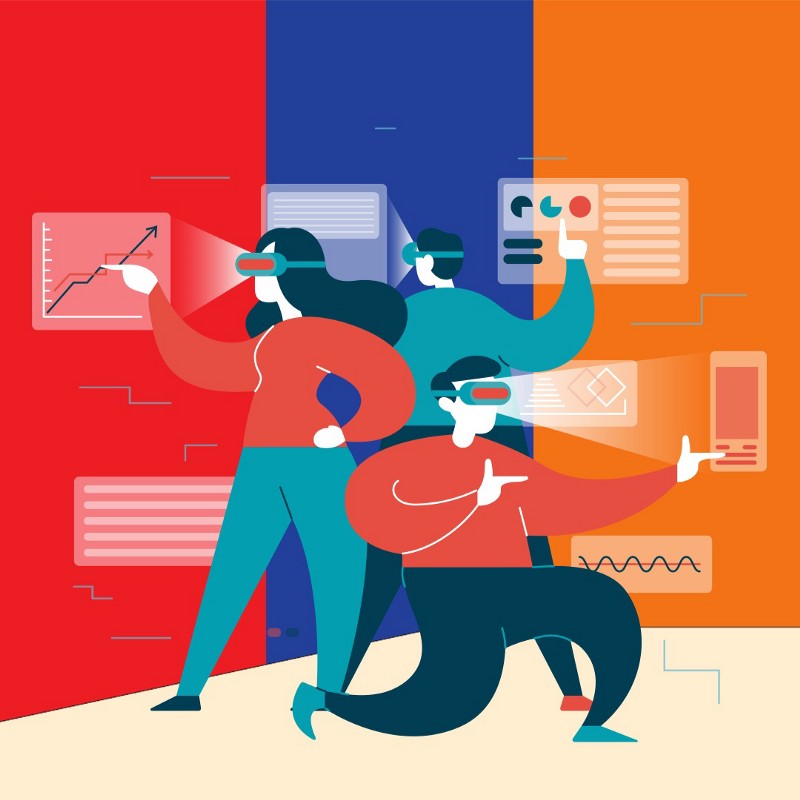 Digital Democracy in political sense stands for an interconnected realm aided through internet and communication technologies. The term is synonymously used for ‘electronic democracy’, ‘tele democracy’, and ‘cyber democracy’. According to Barry N. Hague and Brian Loader, digital democracy in the contemporary context refers to wide range of technological applications like ‘people’s parliaments,’, citizens’ juries, email access to electronic discussion groups and public information kiosks. The emergence of digital democracy is often seen as a platform where society and technology interacts causing an effect in the politics of the state. This interaction originates from its contextual social realities, political culture, legal frameworks and is often constrained through power relations. The expansion of digital democracy in globalized world has enhanced political democracy impacting the participation of citizens in a democratic set up. Historically, the portrayal of digital democracy draws from the notions of direct communication between the politicians and the citizens. Robert Dahl’s, ‘Who Governs?’, argues that public meetings by civic groups were a wellspring for popular sovereignty. Research studies by Castells, Kerbel & Bloom and many others have revealed that online communication is no different from face-to-face interaction between different leaders and citizens. The blogs, podcasts and other online mediums are not only discursive spaces for establishing a link between the political talk and online participation but also facilitating the circulation of news and opinions among the common citizenry.

In terms of political campaigning and using digital democracy for creating political and electoral impacts, Barack Obama is well-known as “the first digital president”. His 2008 election campaign was an endeavor to engage citizens and the government. However, the campaign was later criticized as slicing voters into micro-targetable commodities. As reported here by The Guardian,“it was about turning voters and the magic of the ballot box into giant matrices, thousands of rows and columns of data running across a screen. And politics doesn’t need to listen to what people are trying to say if technology can discover what it needs to win their vote while they slump in front of TV.”

Theoretically, the notion of digital democracy if understood from liberal-individualist perspective or what can be called ‘right-wing’ leaning is that within digitized democracy individuals should be able to have their particular interests realised in liberal political systems. According to Lincoln Dahlberg, “Digital media are understood here as enabling individuals to gain the information they need to examine competing political positions and problems, and as providing them with the means for the registration, and subsequent aggregation”. According the right-wing understanding, digital democracy is a forum to fulfill one’s individual and economic aspirations without hindrance in a marketplace. Democracy here is an aggregation and expression of individuals wills that aims to protect the rights of individuals ensuring maximization of information flows and registration of choices. In that manner, digital media is seen as operating reasonable independent of centralized controls. Holistically, the aim of liberal individualist perspective is to expand the direct individual representative communication and eventually looking forward to bypass the state, corporate, political party, and lobby group interference in this individual-representative relationship.

Within the left-wing leaning or what can also be called as marxist positioning of digital democracy focuses on the cooperative ownership of digital commons. The left-wing vision of digital democracy was ostensible in Jeremy Corbyn’s vision of democratising the internet. In his manifesto he underlined that the labour party aims to democratise the internet such that no one is left behind. He advocated for a high speed broadband across the country, digital bill of rights to protect personal privacy thereby, enhancing online rights of individuals, platform cooperatives– fostering the cooperative ownership of digital platforms for distributing labour and selling services. When it comes to cooperative ownership it also seems that Corbyn’s vision was to nationalise the services like Airbnb, Deliveroo, and Uber. He also envisioned a publically funded open source software where everyone can share a code and learn from each other.

While the right emphasises too much on the individual, the left has its own downsides of stressing too much on the community aspect. The criticisms furnished against Corbyn’s vision were that secure and portable online identity which could be used for services like health, education and housing will have privacy concerns. The online meetings on political matters as suggested in his manifesto is a replica of Twitter.

We might bifurcate the political inclinations as left, right and centre, however, digital revolution has both the perspectives closely attached to it. On the flipside, the secrecy and opaqueness of digital network have always been a questionable matter. The role of Facebook, Twitter, and Instagram in such a reality becomes unaccountable to billions of people as the founder of such organisations are the rule setters. With regards to the matters of governance and policy making, the state must function as an agency to set the framework for digital democracy. Even in terms of technological revolutions, and lessening of gaps one must not forget that power relations remain as it is. Therefore, what could be bad or a gap that requires filling is that democracy has to ensure that social relations are in consonance with digital parlance.